One of the most wonderful things about infographics is that they can include all kinds of fantastic visual elements, from illustrations to data visualizations to photos. One of the elements that can be the most versatile, and the most detail-oriented, is maps.

If location plays an important role in your data story, it’s essential to include a map in your infographic. Perhaps you want to show business locations, sales trends across the U.S., where your employees are working remotely from, survey results based on location, or demographics in a new market you are targeting.

Here’s an example of a map about a trend affecting many industries: 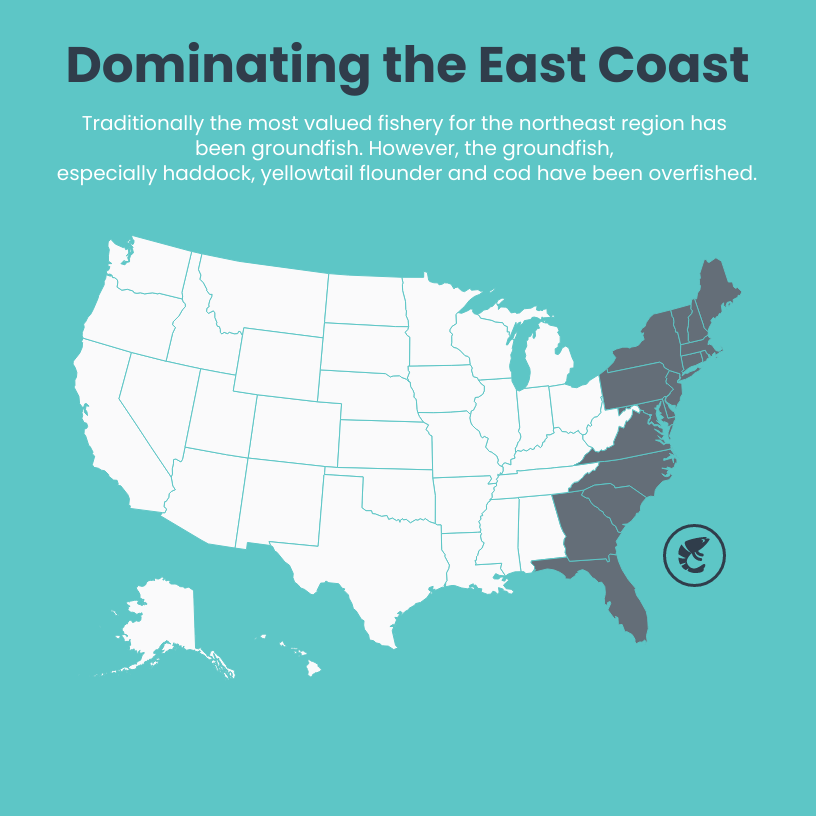 Here is another about which continents are dominating a market share: 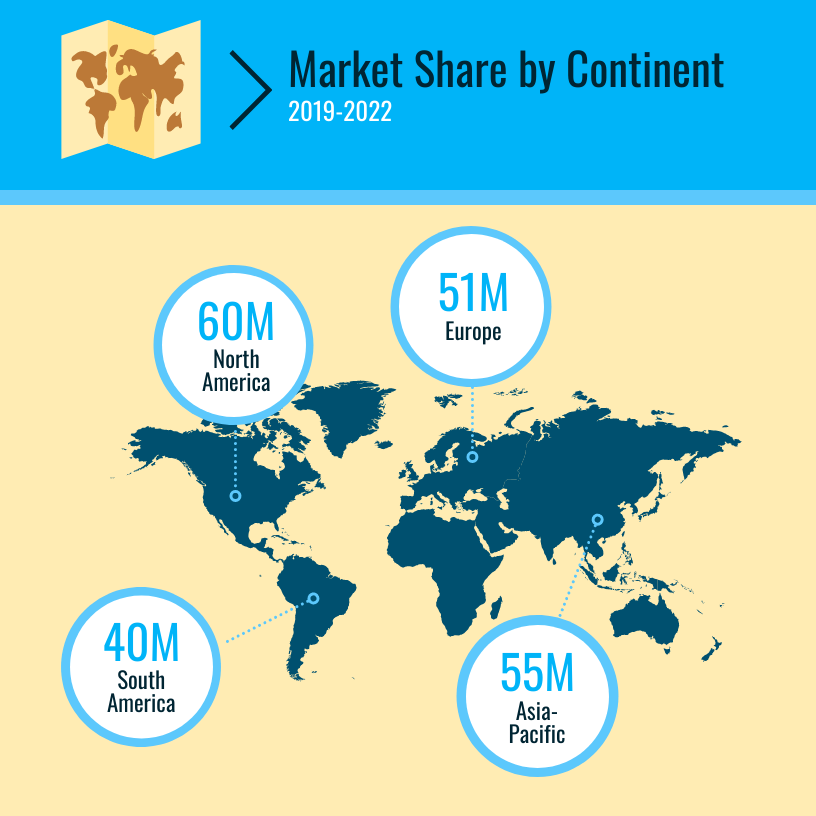 There are countless scenarios in which a map can add so much to your visual communication. But what does it take to produce them?

Too often, making accurate, data-based maps requires using complex analytical tools and having specialized knowledge. But if you aren’t looking to analyze anything, and just want to create and share map visuals, you can easily get started today with the information in this article and Venngage’s powerful tools.

That’s right, there’s no need to download new software or deal with lots of clunky tables, and you don’t have to be a professional designer. You can quickly create informative maps online with Venngage’s Map Maker.

3 things to know before you start with map infographics

Maps are great ways to tell place-based stories, especially if they are data stories, but they are special for other reasons too.

It helps to keep this in mind because as the 3D is translated into a 2D surface, it’s almost impossible to avoid distortions of some kind. These distortions can influence perception.

This is why Greenland often looks similar to the size of South America, and Alaska dwarfs Mexico, which is not the least bit accurate. (This typical depiction is known as a Mercator projection.)

Even if you don’t plan to become a professional cartographer (map maker), it’s necessary to know about this distortion as a visual communicator. The aforementioned depiction, even if inadvertently, minimizes the southern hemisphere, and that is critical to keep in mind if Africa and South America are important places for your story or your audience.

2. Maps can show places at a variety of scales

You can visualize the entire globe, or a county, a state, even a neighborhood.

When you are creating a map, you’ll need to consider which is most meaningful for your story. This example shows locations spread across a region and identifies the specific address for each location. 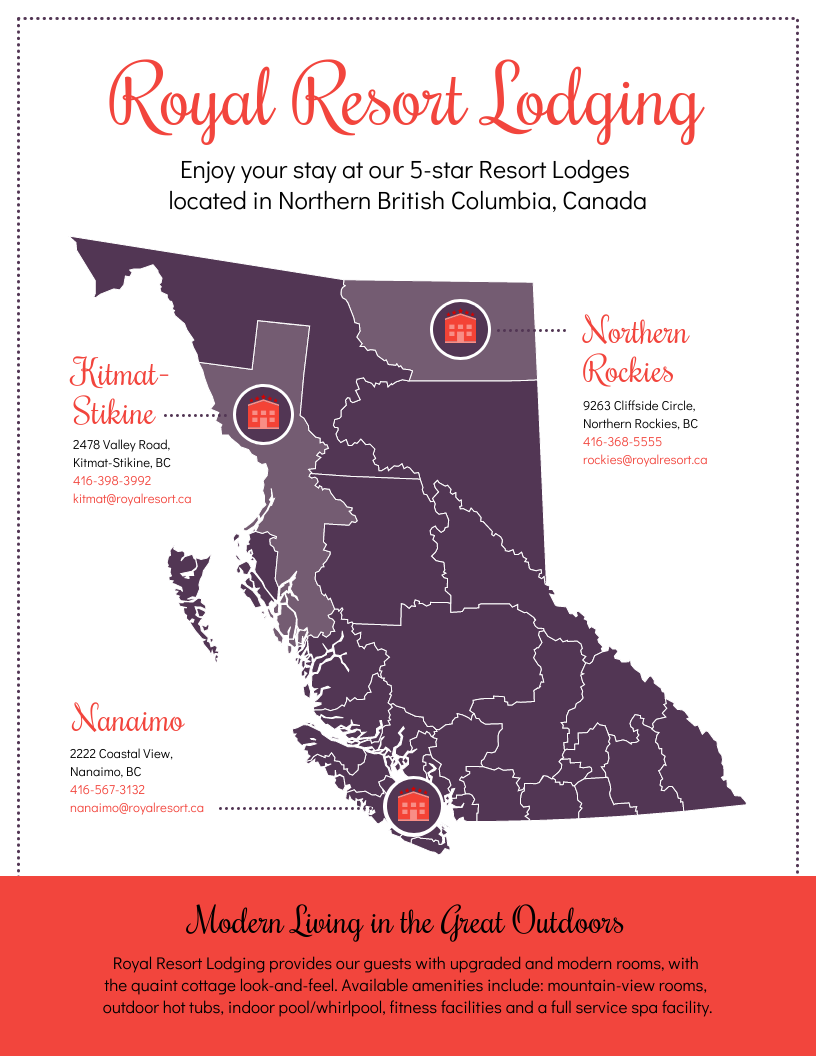 With Venngage’s Map Maker, you can create a map of the world, a continent, a country, as well as Canadian provinces or territories or a U.S. state. For the latter, you can map data down to the county level, and you can even automatically add labels for each (so you don’t have to manually do so one-by-one).

3. Maps are abstractions of the real-world

As representations, maps show an area in a fairly general way. Since we want them to also appear to be accurate, especially if we’re using them to communicate about data, we need to make sure we aren’t using them to mislead people, even if accidentally.

Be mindful of basic map conventions such as: 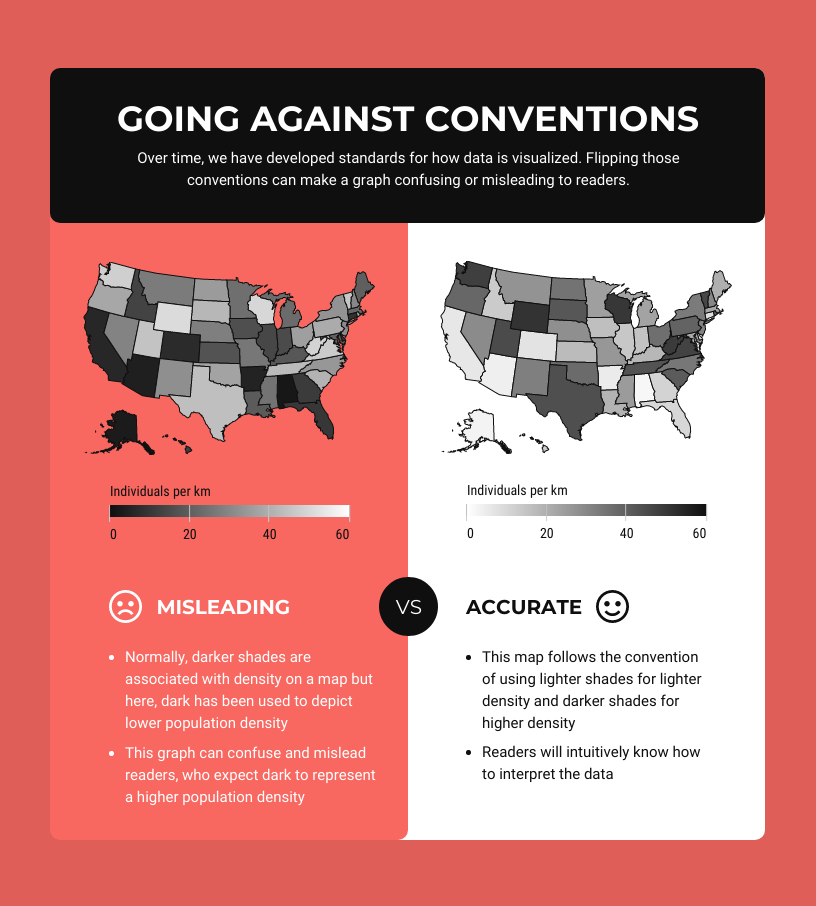 You can learn more about how to make sure you aren’t misleading your audience in 5 Ways Writers Use Misleading Graphs to Manipulate You and The Worst infographics of 2020 (+ Lessons for 2021).

Checklist for designing maps for infographics

Now you’re ready to get going with creating maps to include in your infographic. Here’s a checklist of the five things to do.

Do you have information already on hand, such as spreadsheets, survey data, or a list of locations? Make sure you have permission to share the data. You may need to aggregate, or summarize, the data by county, state, etc. This not only helps you prepare for visualization, but it also helps ensure that individual privacy is protected.

You might also want to consider using public data related to an area of interest, such as demographics, prices, health, etc. Some good data sources include The World Bank, U.S. Census Bureau, and Data.gov. If you are new to using geospatial data, you’ll want to download a CSV or XLS file and then open that file using Excel, Google Sheets, or another spreadsheet program to view the data by country, state, county, etc.

One last thing to consider: Many data-based maps are choropleth maps, which means areas on the map are colored based on statistical data associated with that area. For these maps, the data has to be classified or grouped into data ranges or classes. How data is grouped changes the look of the map, and therefore how readers will interpret the data. Here are some good rules of thumb (if you want more depth, this article from Esri offers great examples):

Here is an example of a choropleth map that breaks data into equal intervals. It works well because the visualization enforces the main message, which is that the U.S. spends a lot more than other countries on healthcare.

2. Decide what you will symbolize

No, I don’t mean what icons you might use, not exactly. In cartography, symbology refers to:

Here is an example of a map that shows continents through the white areas, countries through the blue borders between them, and cities through numbered points. 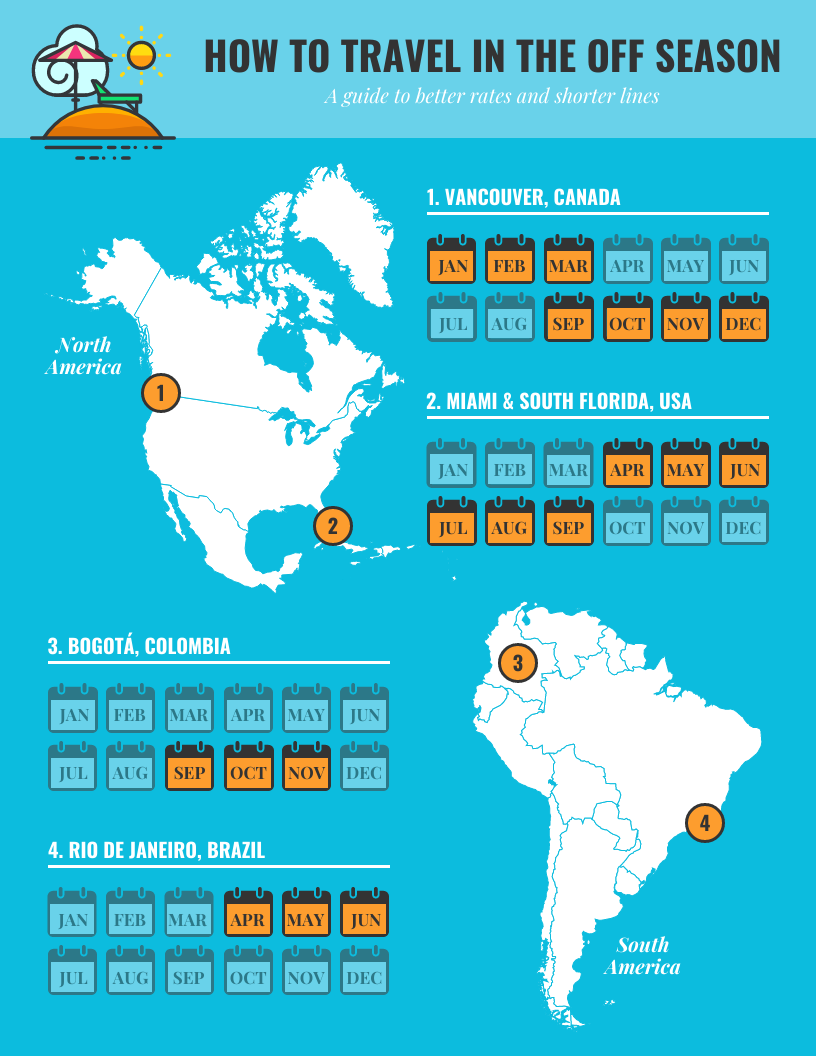 Remember how area can get distorted on a map? Area can also distort how a reader views a map: People may inadvertently misinterpret data based on the size of the area, meaning countries or states with more geographic area are naturally emphasized. Some good alternatives include point-based maps (like this example featured in Popular Science), or equal-area choropleth maps like this one. 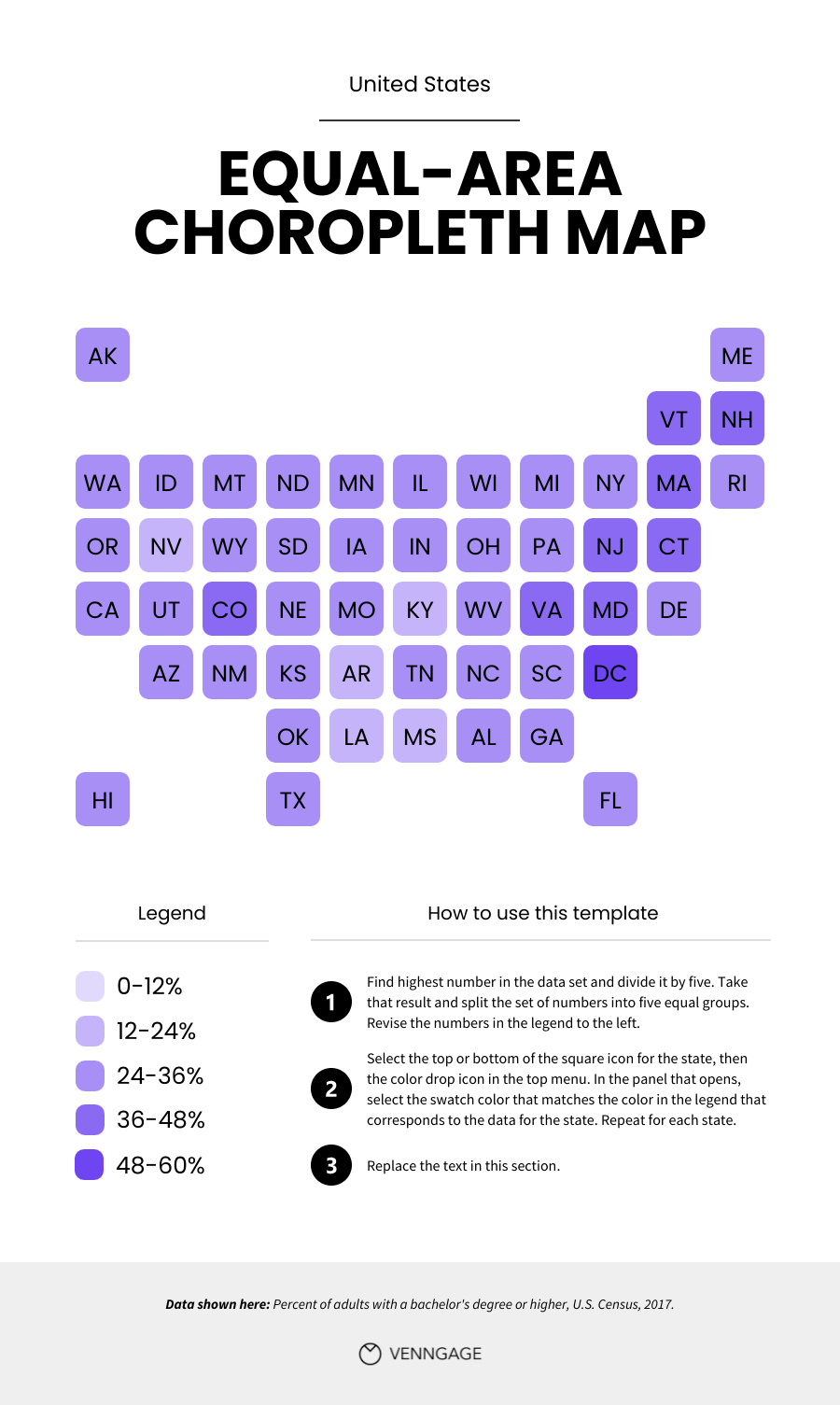 3. Use color to clarify

Once again, maps are special. Often in design we think about color palettes based on things like trends, branding, emotional states, etc. When it comes to maps, color is a vital communication device that requires a different kind of thinking.

The first thing to keep in mind is basic map conventions:

If you are visualizing data, you will also need to think about how to help people easily interpret the data by using appropriate colors. 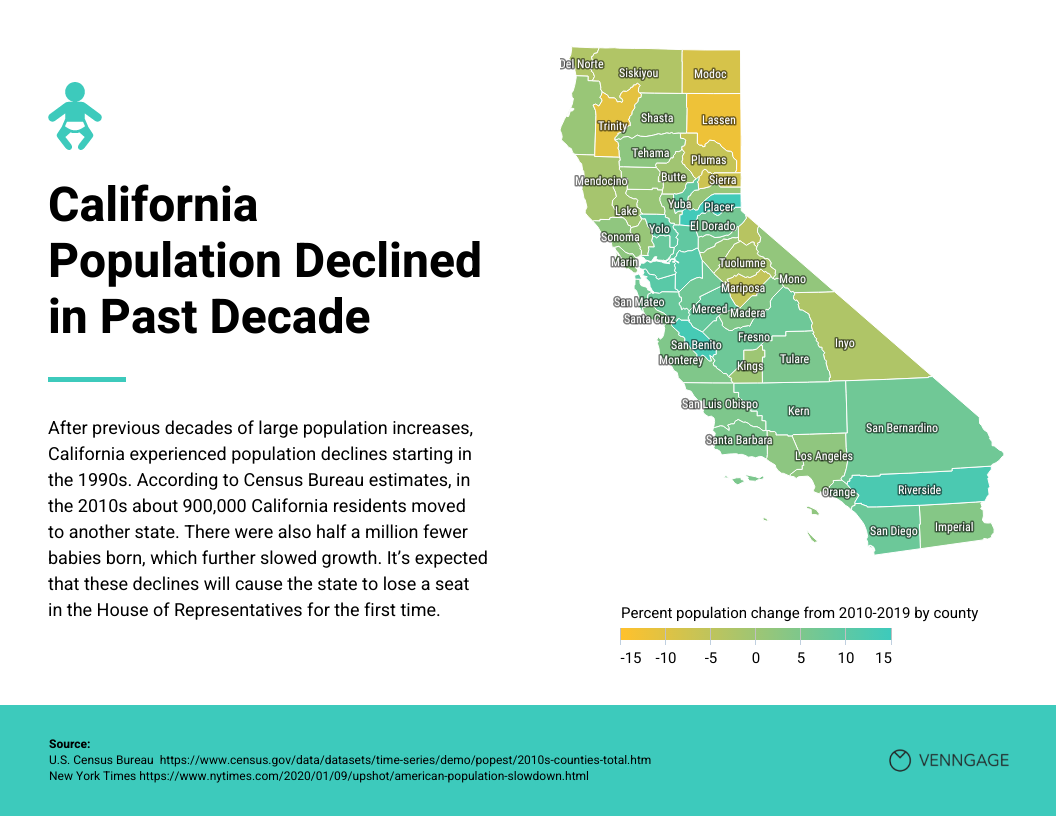 You will also want to consider colors that are appropriate for color blindness, which is more common than you might think. A good place to start with that is to not use red and green together.

4. Label the places that matter

As you start to label countries, states, cities, etc., keep in mind that you will want to minimize clutter in your map so it’s easy for people to read quickly. Instead of labeling every road, river, and tree, focus on labeling the places that matter most. You can label with locations, like the county labels in the map just above, and/or you can label the data (see the map in the next section below).

You can add these labels in one of these ways: 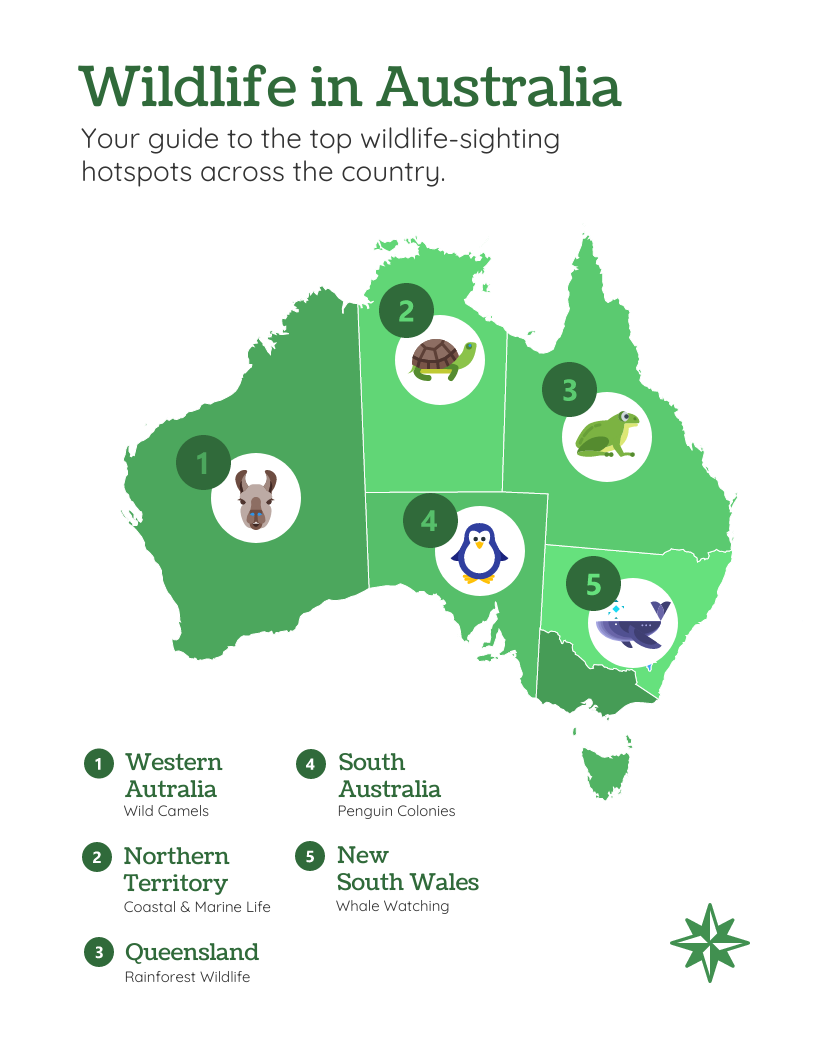 The icons used also draw more visual attention to the places, so you might consider this approach if it doesn’t clutter the map infographic. Venngage’s Map Maker has an in-editor library of thousands of free icons you can include.

At last, you are ready for some finishing touches. Here are some details you will likely want to include somewhere near the map:

The most important thing, with all of the items on this checklist, is to make sure your reader can easily understand the message your map is communicating. In this map, the legend shows that colors correspond to gas prices in the U.S., but the labels on the map really help the reader identify the values for each state. 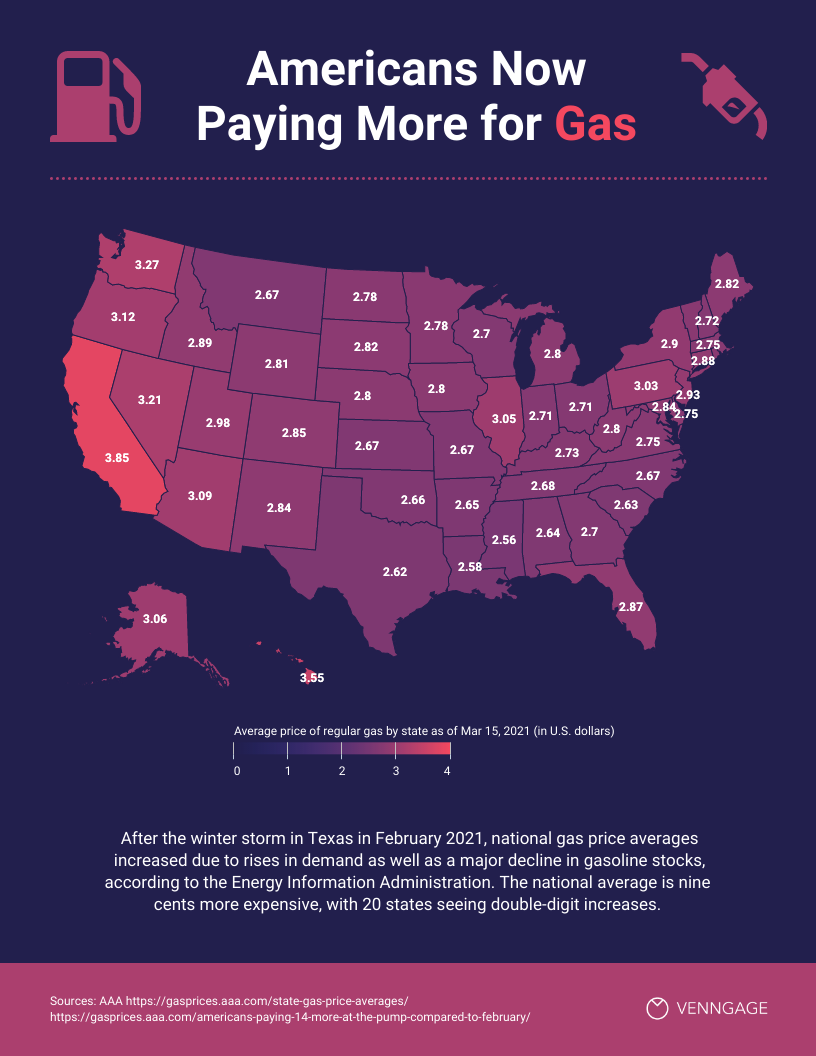 Pulling it together: infographics with maps

Often a map is just one part of an infographic, which may also include elements like other data visualizations, illustrations, icons, narrative text, etc. You will want to make sure your map is well integrated with the entire story you are telling.

Again, try not to overwhelm your reader with too many visuals or too much text, and help them read the infographic easily by emphasizing important elements like titles and key data points through size or color. If you need some help with this, you can start with one of Venngage’s pre-made map templates, created by our in-house designers, and make edits so the content best fits your topic.

Here are some examples. This first one uses a map to orient the reader to a place that is central to the topic. There are no geographic or political features of note, but the use of blue in the background effectively highlights that Iceland is an island. Icons are used to call attention to the textual elements, which are spaced around but do not crowd the map. 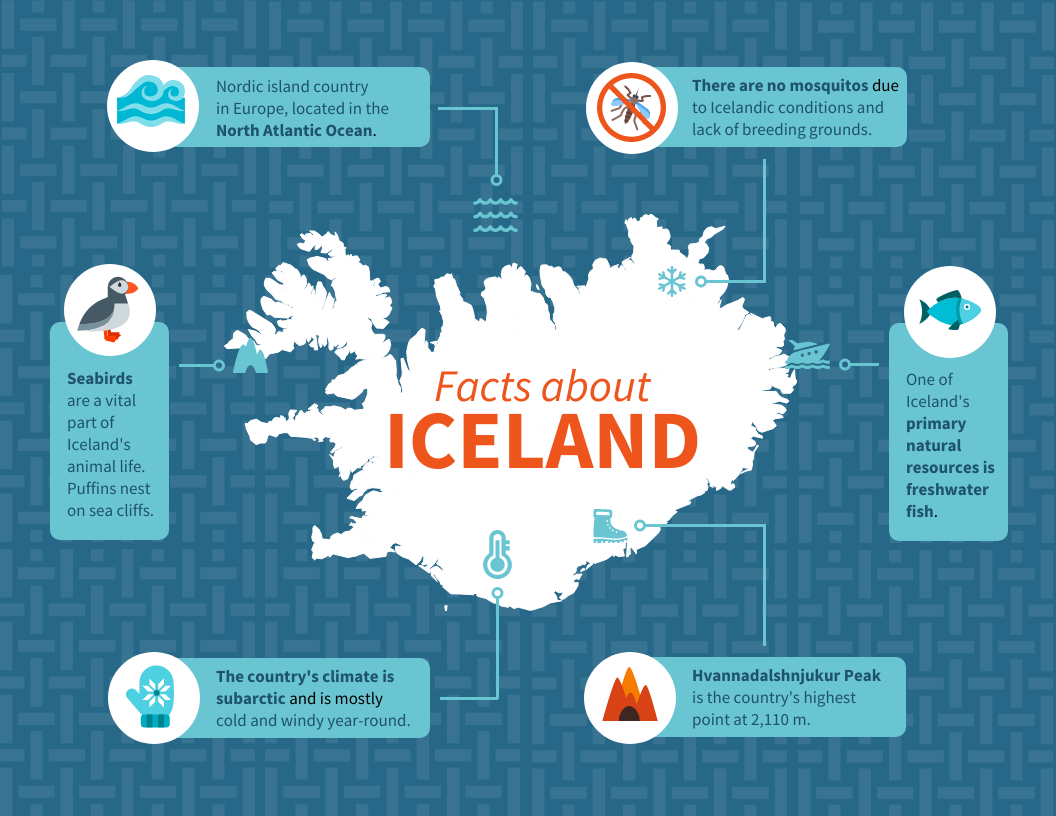 Here is another example of a map that does not include data, but instead is included to help people locate key places, in this case states in the U.S. Information about these states is listed beneath the more-prominent map, with icons that relate to the content. Icons are also used in the map, along with labels, to draw attention to the key states. 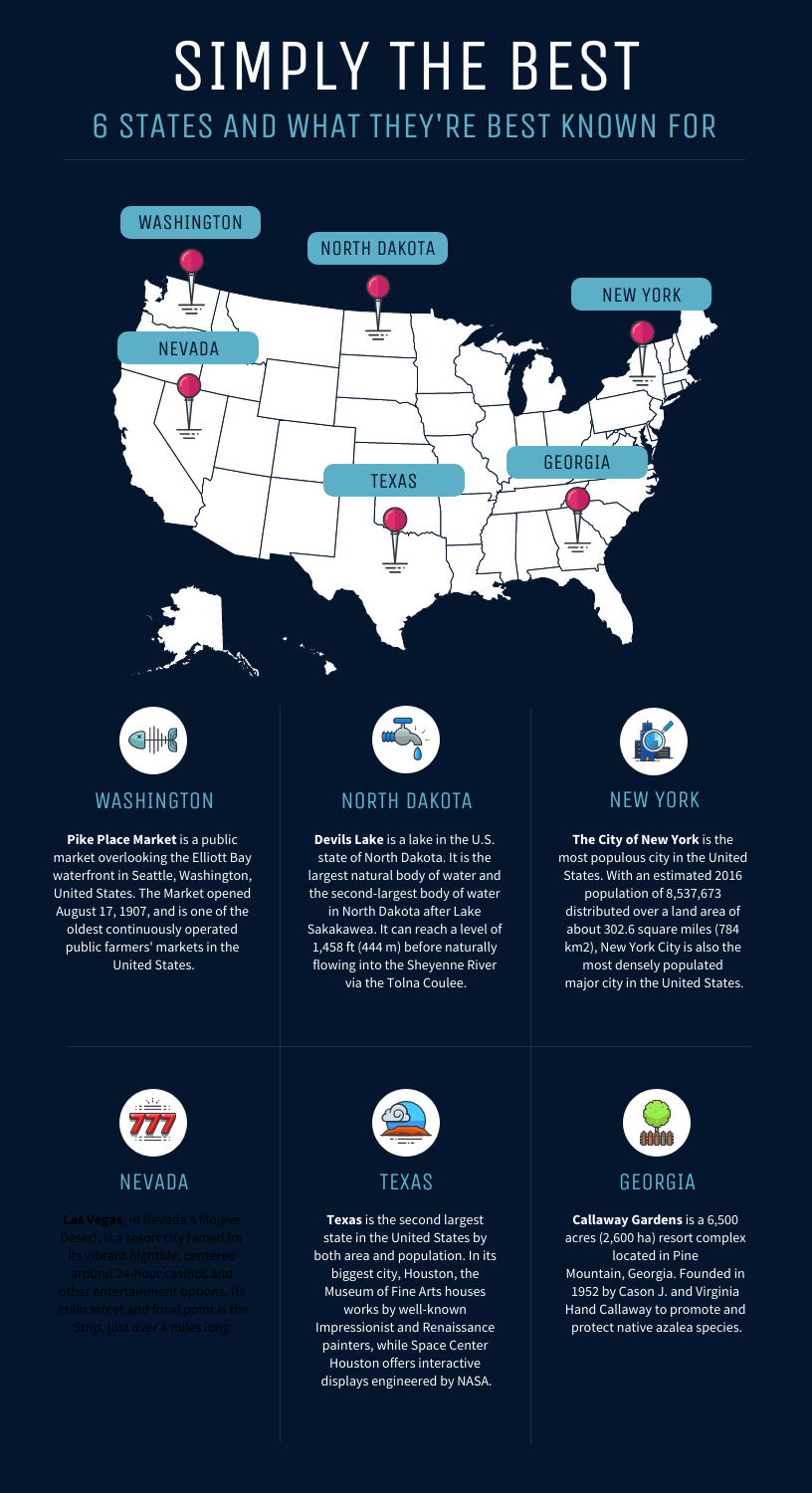 In this next example, the large map of Japan helps the reader connect to the country that the data was sourced from. While data is not included in the map, it is included in the infographic, and some is visualized in a timeline and in a pie chart.

This last example includes a data-based map, as well as pie charts, icon charts, and a line chart. While the other visuals help the reader understand overall trends, the map helps them recognize trends based on geography or location.

You can explore more map infographic templates in this blog and on our templates page.

In summary: Map infographic is a powerful tool to tell data story

Now that you see how versatile and impactful maps can be, I’m sure you will agree that it’s well worth it to take some time to think through making them as clear and compelling as they can be.

Remember, if place matters, so does a map. With this guide, you are now ready to begin creating and sharing map infographics! You can start creating your map infographic for free using Venngage’s easy-to-edit templates and intuitive Map Maker.