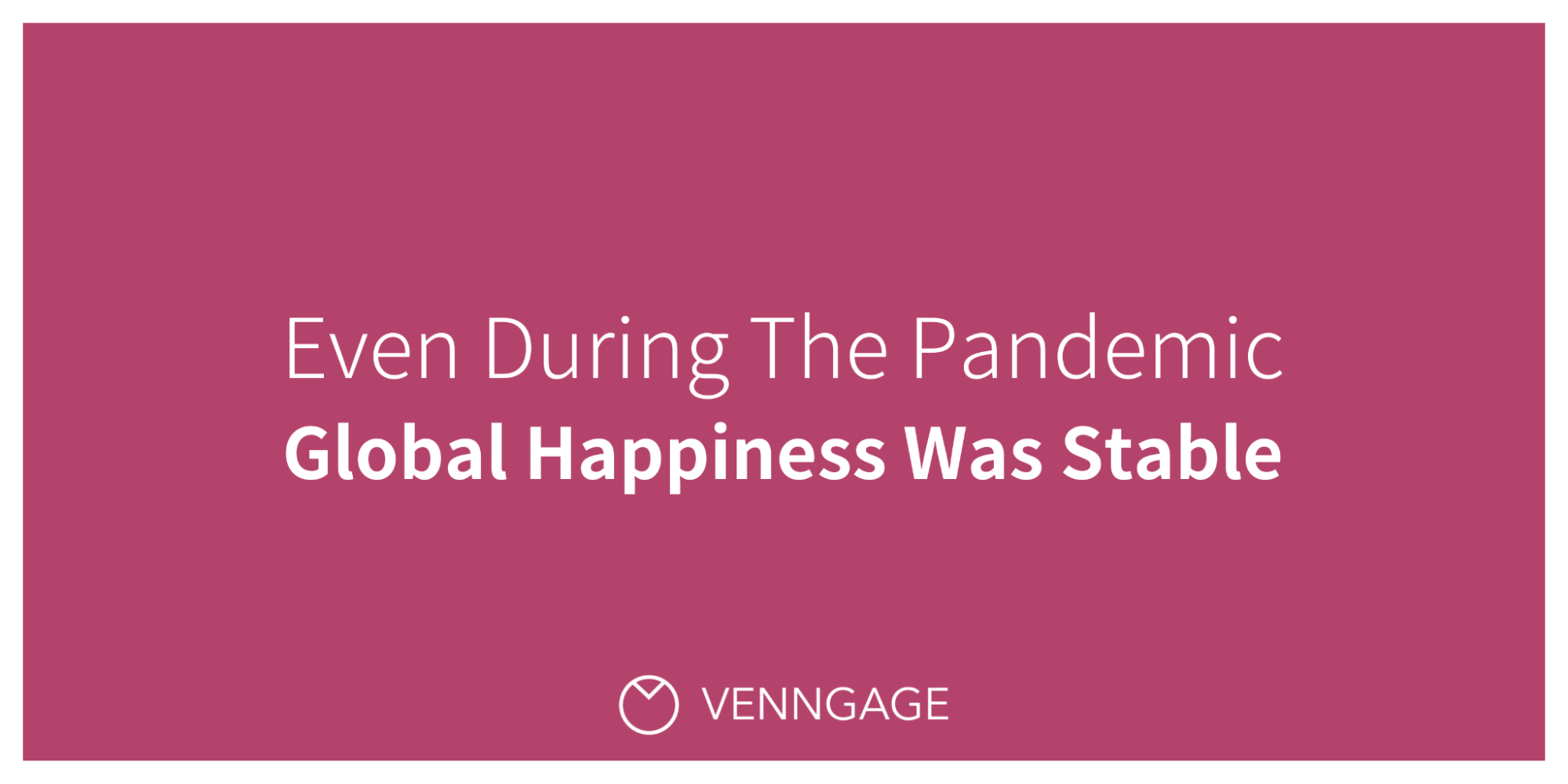 It’s that time of year again when the World Happiness report forces us to confront the realities of how people are feeling about life around the world.

This year’s report comes out after an unprecedentedly challenging year with the global pandemic—COVID-19—affecting everyone across the globe.

So, how have we fared this year? Are we happier? Unhappier? Let’s take a look.

Despite the hardships of COVID-19, self-reported life satisfaction remained consistent across 95 countries

Well, it’s not surprising that self-reported life satisfaction levels haven’t risen given what’s happened in the last year. But the consistency with previous years’ findings is still good news: 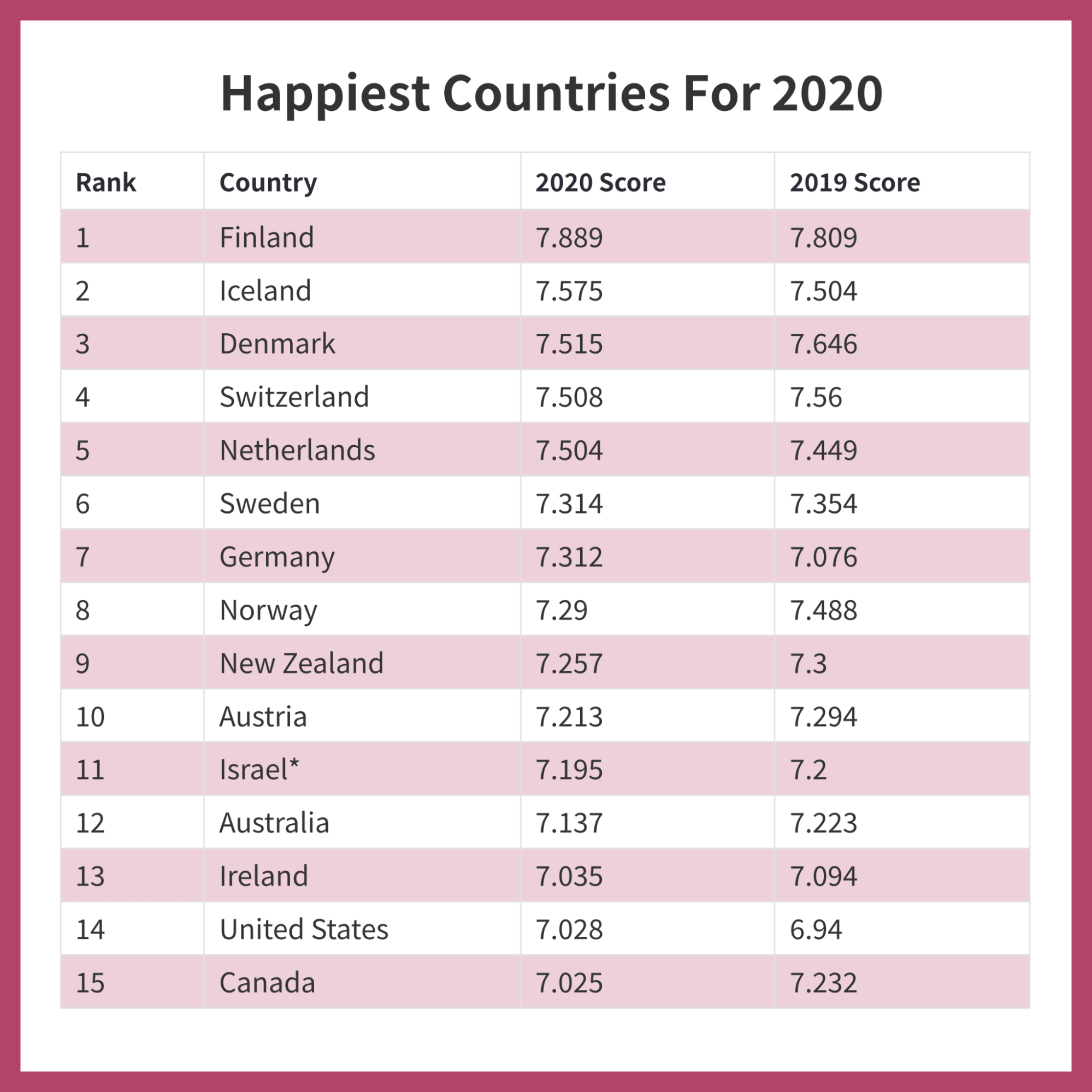 According to Jeffrey Sachs, one of the researchers behind the report, the data implies “people have not thrown up their hands about their lives.” So, if anything, this report reminds us of how resilient we all are in the face of hardship.

Germany had a 3.3% increase in happiness in one year, pushing its ranking up to 7th from 15th: 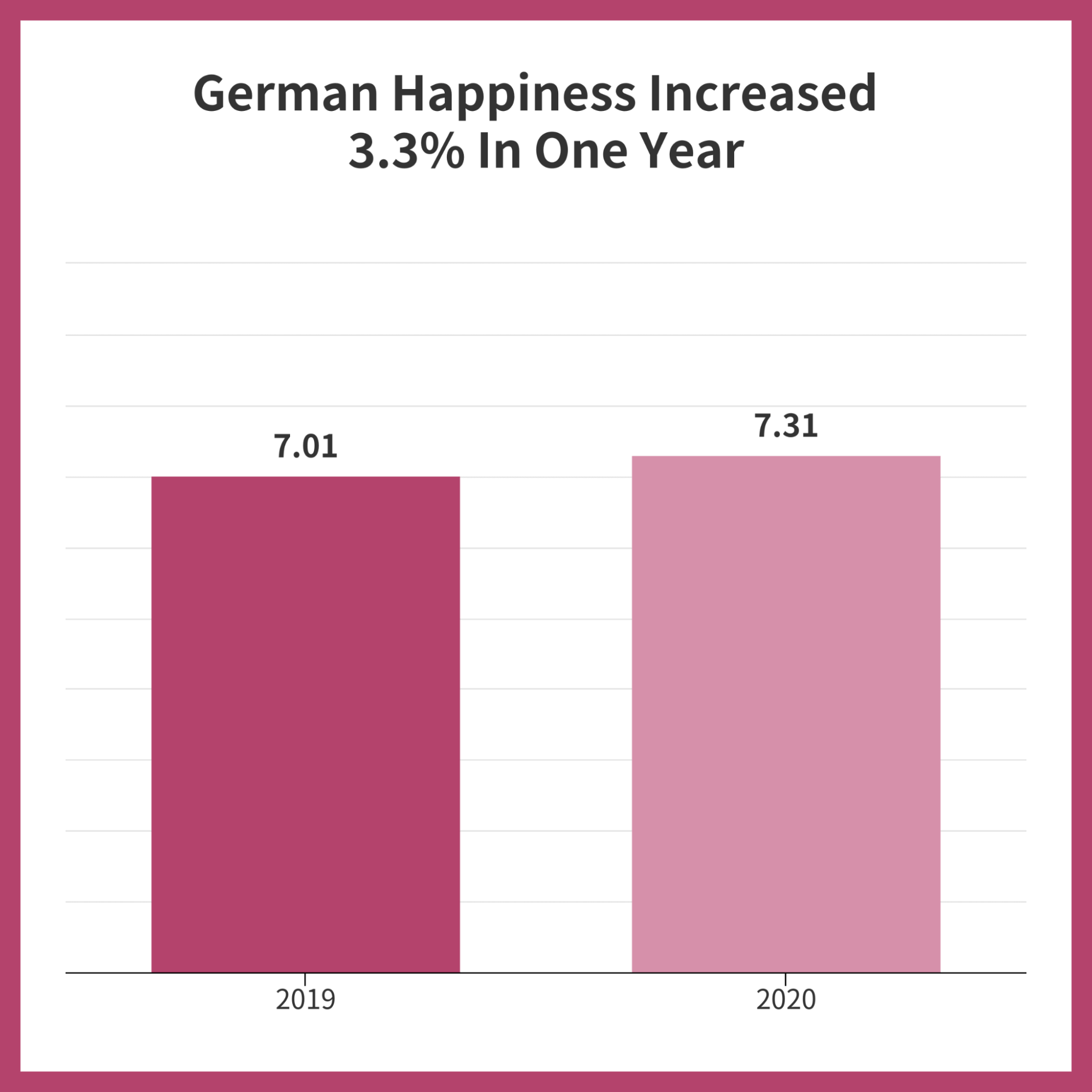 Not every country saw such a massive increase over the past year: their rankings and scores stayed pretty stable.

Given how widespread COVID-fatigue currently is and how challenging this last year has been, it’s important to remind ourselves that persevering through difficult times is an admirable feat.

Finland, Iceland, Denmark, Switzerland, and the Netherlands reported the highest levels of happiness

Finland, Iceland, Denmark, Switzerland and the Netherlands reported higher levels of public trust (which is connected to how their governments have handled COVID-19 this particular year) as well as lower levels of inequality. 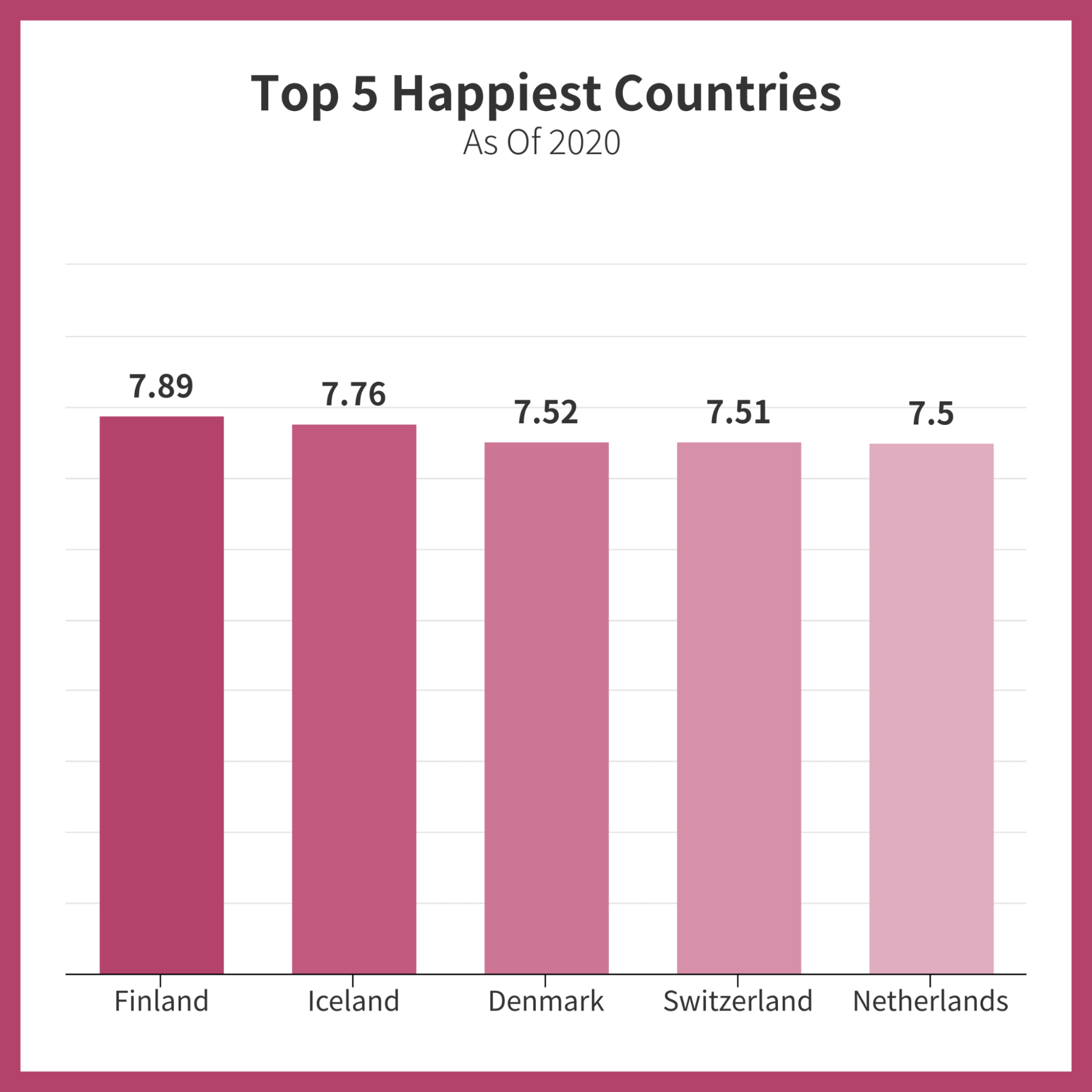 Researchers suggest this combo is partly why these countries were able to keep death rates low during the pandemic and social cohesiveness high.

The United States jumped from 16th to 14th this year in the overall happiness ranking. Yet a larger number of Americans reported a sudden increase in anxiety and depressive symptoms throughout 2020. 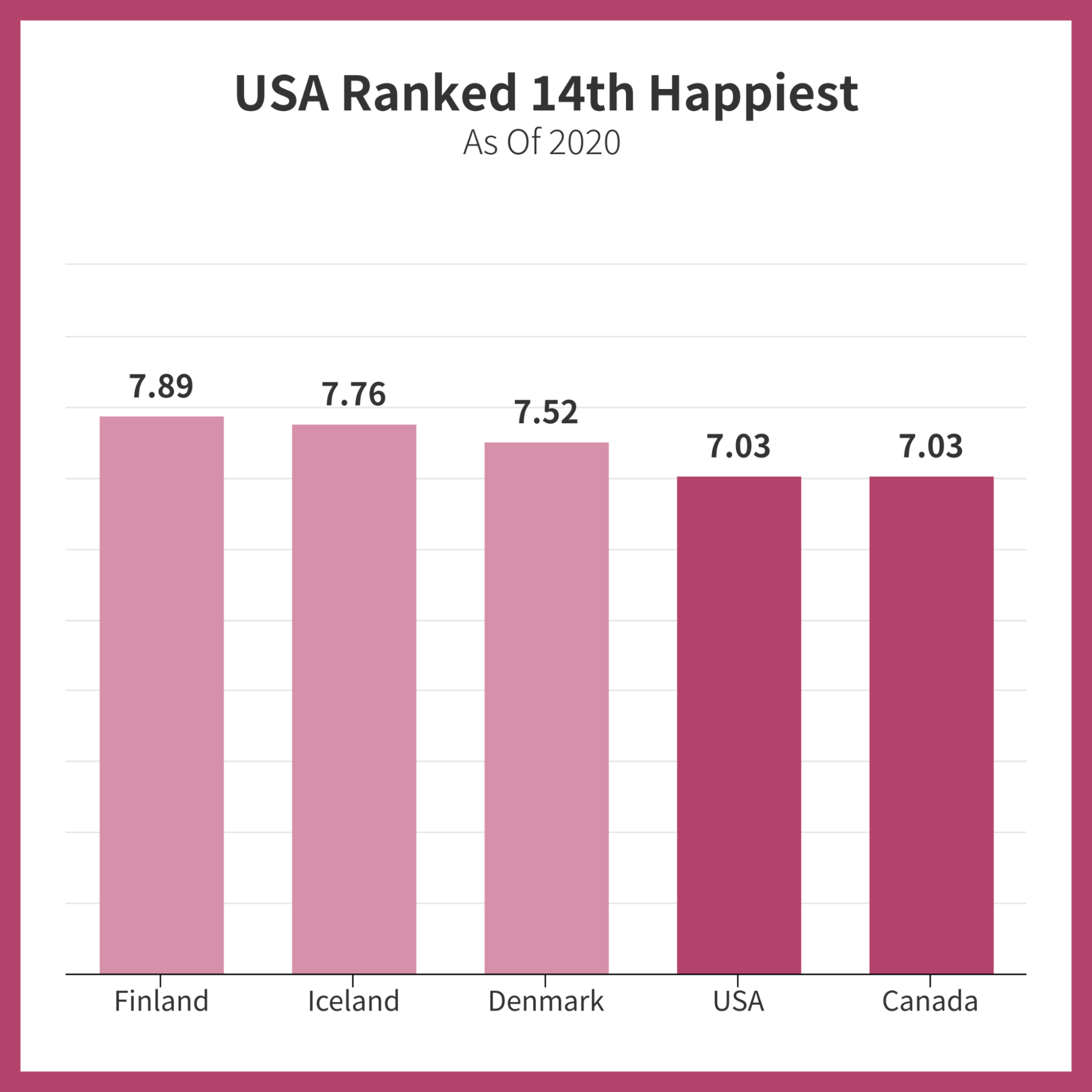 On another note, Canada ranked 15th this year, dropping all the way from 10th with a 2% decrease in happiness averages compared to the results from 2017-2019.

The drop in positive emotions isn’t surprising, considering our lives have undergone a total overhaul in the last year. That being said, 42 countries showed a significantly higher frequency of negative emotions across their population. 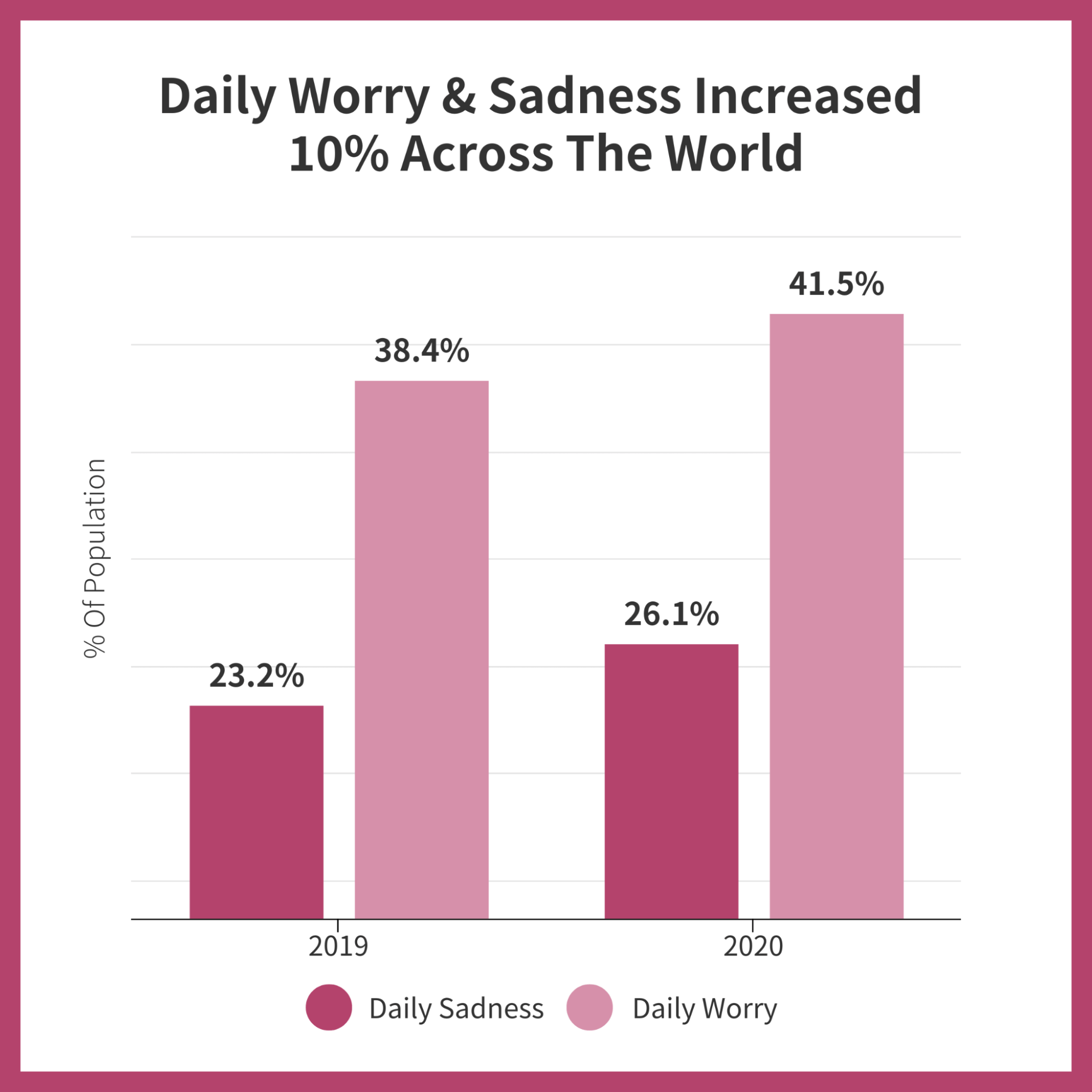 In the UK, there was a 12% increase in the number of people feeling sad during the majority of the day before the survey (which was how negative emotions were measured).

Interestingly, throughout the report, trust was the key factor between happiness and COVID-19. This means that the more people trusted their public institutions, including their governments, the happier they often were overall.

According to the report, societies with greater income equality also fared better throughout the pandemic too.

While we may not be happier this year, perhaps this report shows us the path we need to go down to find greater happiness across the world in the future.